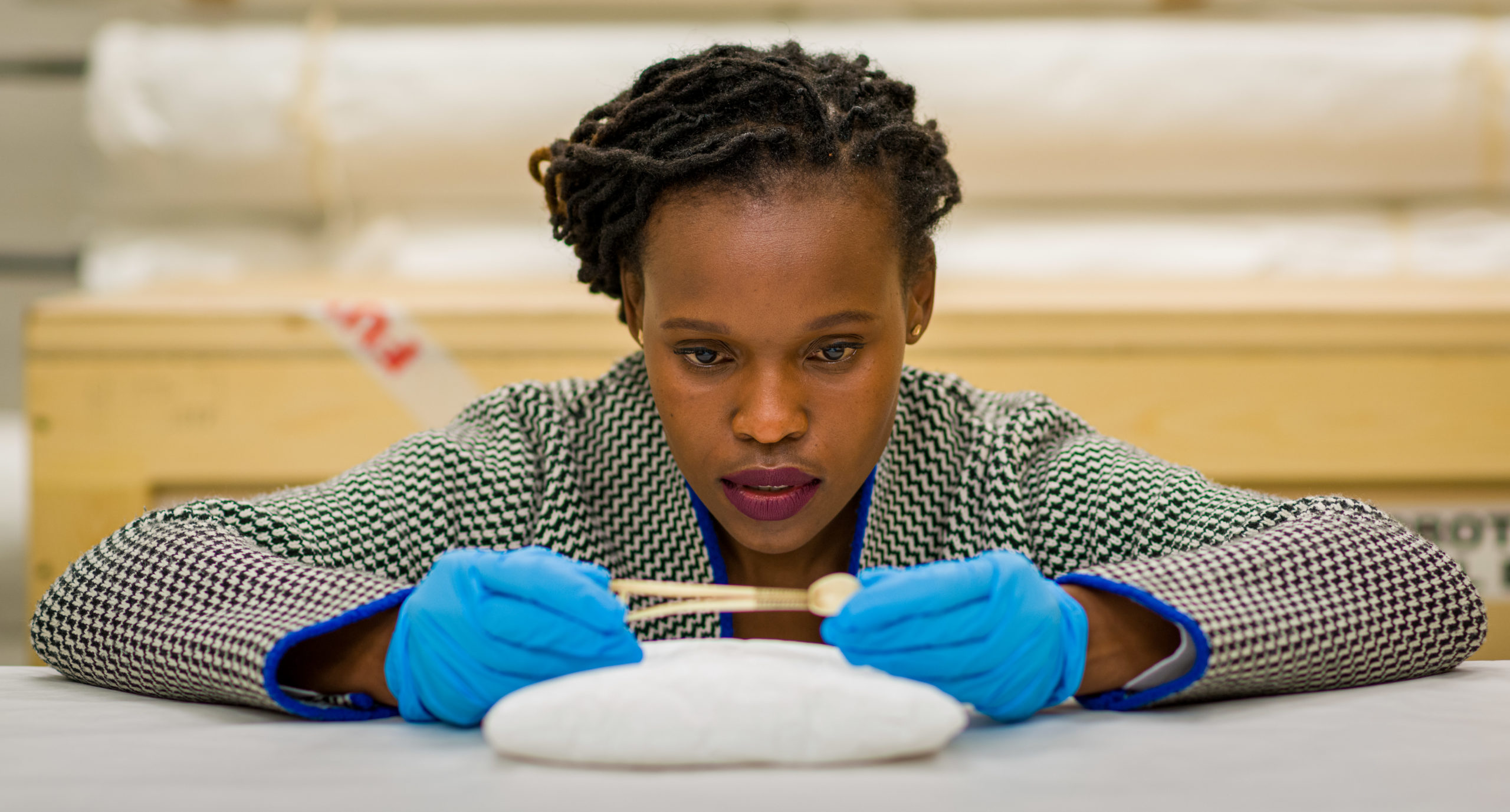 Sethembile Msezane with the snuff spoon she focused on as part of her residency. Photo: Andy Crouch

As part of her Sainsbury Centre residency, South African artist Sethembile Msezane took a snuff spoon as inspiration for a fascinating new project

After delays caused by the pandemic, Sethembile Msezane finally arrived for her residency at the Sainsbury Centre and Sainsbury Research Unit in March, when England was still in lockdown. Once there, the Cape Town-based artist – whose work comprises photography, performance, installation and film – got to work in a way she had never before.

In isolation, Msezane started to work with an item in the Centre’s collection of art and objects spanning 5000 years, with a view to realising an exhibition that opened on 5 June.

“I already had an idea while I was back home, because I basically lost about a month [of the fellowship],” the artist explains. “I had to start thinking about what the work would look like [in advance], which is something that I usually like doing when I get to a space.”

Using this different approach, she selected a snuff spoon, acquired by the Centre’s founders Robert and Lisa Sainsbury in 1972 and originally from Msezane’s home province of KwaZulu-Natal. Snuff, along with all tobacco products, was banned during level 5 lockdown in South Africa. Traditionally, snuff holds a spiritual function and Msezane decided to take a whimsical look at this during her residency.

“In many South African cultures, snuff is used for various things but in my culture, we use it as a tool to communicate with our ancestors, to make the veil between the living and the departed thinner so that we can communicate with them,” Msezane says.

In the resulting works Phahla, 2021 and Nibizwa Ngabangcwele, 2021, she uses installation and video art to explore these ideas, and their ties to the explosion of conversation around contemporary art and African culture.

“It seems like a lot of artists and art practitioners in different fields are collectively heeding a call from the ancestors, leading us to talk about decolonisation in repatriating objects and causing imperial ideas to fall,” Msezane says. “There is a rise of a collective sense of consciousness, a spiritual awakening of sorts within art-making and a rethinking and calling for objects to be returned back to their rightful place, restoring our cultural heritage as Black people.”

Phahla is a sensory work incorporating scent, texture and meditation; in it, wax sculpted hands of the ancestors reach up from a plinth in gestures reflecting the sprinkling of snuff. The hands interact sometimes in play and sometimes in conflict.

This interplay is further explored in Nibizwa Ngabangcwele, a film in which the hands of the past come to life, playing out a dialogue against an idyllic blue sky.

Drawing on the unique experience of taking part in a residency in isolation, Msezane attempted to answer these questions – tapping into the unheard voices of the past in order to express her feelings on where we are today.