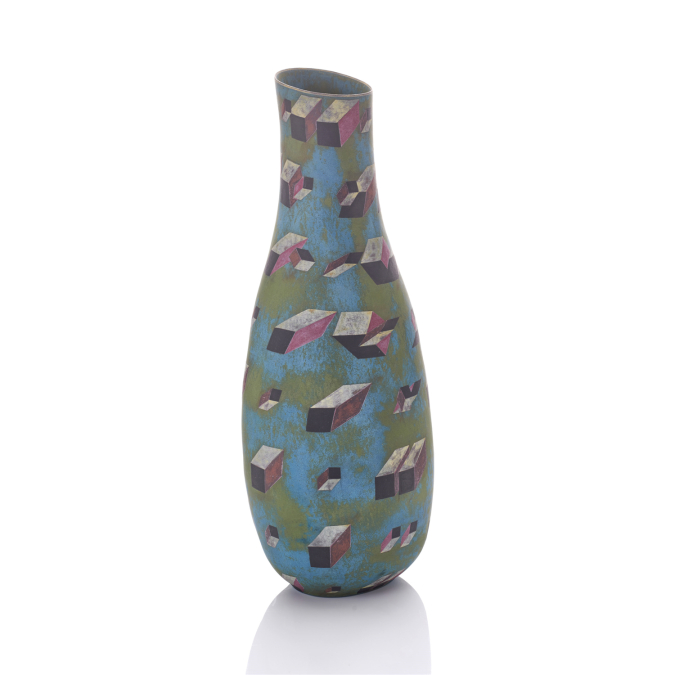 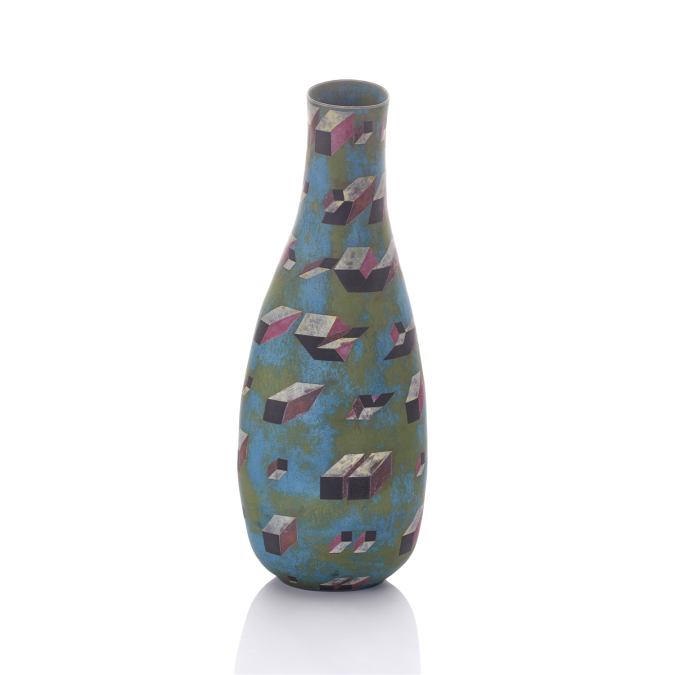 Blown Away Vase; Collision of Particles

Elizabeth Fritsch CBE (b.1940) was part of a group of radical artists graduating from the Royal College of Art in the 1970s, who explored the abstract potential of the vessel form. From 1968 to 1971, Fritsch was a student of Hans Coper (1920–1981), whose sculptural works investigated structure and pushed at the boundaries of what constituted a vessel. [1] The bold graphics of RCA tutor, Eduardo Paolozzi (1924–2005) may also have influenced Fritsch’s imaginative approach to surface pattern.

Fritsch hand-builds her vessels using coils of stoneware clay. Thinly modelled, she smooths their outer surfaces to create sleek, aerodynamic profiles. This process enables Fritsch to mould elegant, asymmetrical, leaning forms, as observed in her ‘Blown Away’ series from the 1990s. Fritsch decorates her vessels with hand-painted engobes (coloured slips), which are applied to clay that has undergone an initial firing. The decorated bisque ware is then returned to the kiln for successive firings at stoneware temperature (around 1260 degrees). Fritsch’s mastery of technique and materials enables her to reproduce a palette of intense and vivid colours with absolute control.

Blown Away Vase; Collision of Particles is sculpted to give the vessel a distinctive asymmetrical shape with an elliptical rim. Green and blue engobes have been applied to the surface of the vase to create a mottled ground upon which cubes of various sizes are overlaid in coral, black and white. The cubes’ outer corners and edges are manipulated to produce a range of dazzling optical effects. The distortion and collision of the cubes becomes more complex and dense around the neck of the vessel, where the form narrows, and their diagonal projections direct the eye toward the upper-edge of the vase, exaggerating the tilt of the form. In this work, the vessel’s decoration and profile work together to suggest the pull of gravity or the force of a strong gust of wind.

Before undertaking an MA at the RCA, Fritsch studied piano at the Royal Academy of Music from 1958 to 1964. [2] Fritsch’s originality lies in her ability to combine her passion for music with her technical understanding of clay. Evidence of her musicality can be observed in the harmonious colour combinations that rhythmically decorate her pots. Paul Greenhalgh praises Fritsch’s ‘lyrical geometry’, which makes the whole pot ‘vibrate with superbly orchestrated colour’. [3] This unique quality of Fritsch’s ceramics appeals to both the eye and the mind.

In her early work, Fritsch challenged the notion of hollowness that is traditionally associated with the vessel, by squeezing her forms flat and sealing their rims closed. These ‘optical pots’ had more in common with paintings than studio pottery and paid homage to the trompe l’oeil games of perception enjoyed by Cubist artists, such as Georges Braque (1882–1963) and Pablo Picasso (1881–1973). Influenced by mathematics, metaphysics and geometry, Fritsch’s work succeeds in being both disciplined and playful. [4] Her sophisticated use of colour and perspective has rightly led critics to compare her ceramics to the compositions of the Renaissance painter and geometer, Piero della Francesca (c.1415–1492). [5]

Fritsch’s ceramics possess poise and a graceful economy of form. Her work subtly investigates quotidian vessels, such as cups, jugs, bowls and bottles; however, their modest cavities and narrow openings question the vessel’s traditional role as a functional receptacle. Decorative patterns wrap around Fritsch’s later works, indicating that her ceramics are to be viewed in the round. Reduced volumetrically to what Fritsch wittily describes as a ‘two and a half dimension’ [6], she draws further attention to her compressed forms by painting their surfaces with cubes, rectangles and tessellating patterns, thereby generating complex optical illusions.

Elizabeth Fritsch was shortlisted for the Jerwood Prize for Applied Arts in 1996 and 2001, and is one of the UK’s most highly valued ceramic artists.

The Raw and the Cooked: New work in clay in Britain exhibition catalogue (Oxford: Museum of Modern Art, 1993)

Pots in Painted Stoneware (London: Bellew in collaboration with the Northern Centre for Contemporary Art, 1993)

Credit Line: Purchased with support from the Arts Council England/V&A Purchase Grant Fund and with funds from the Joyce and Michael Morris Bequest 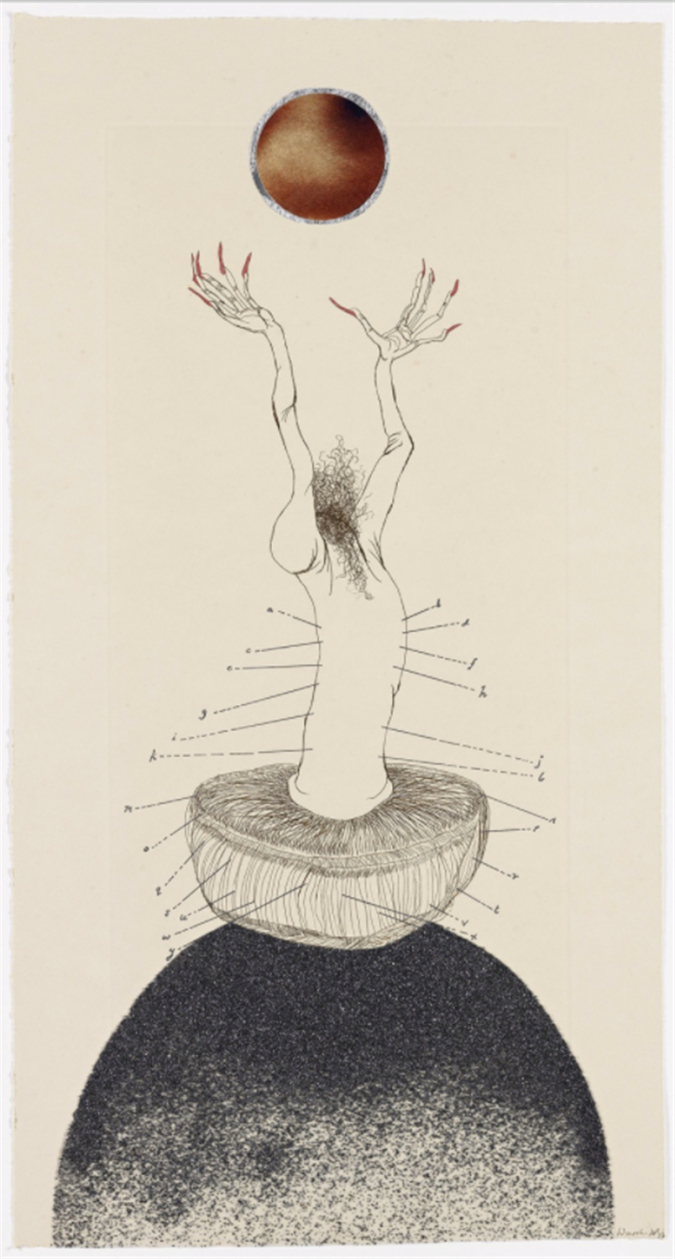 The Original Nine Daughters (8 of 9) 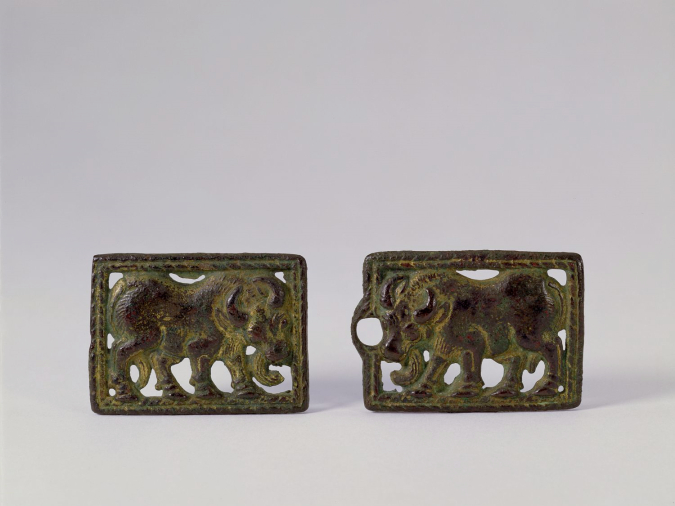 Belt plaque, one of a pair

Eleven combs (one of eleven) 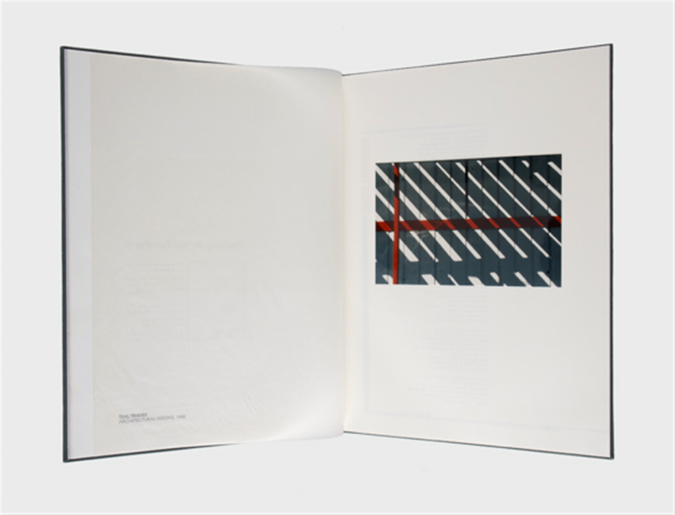