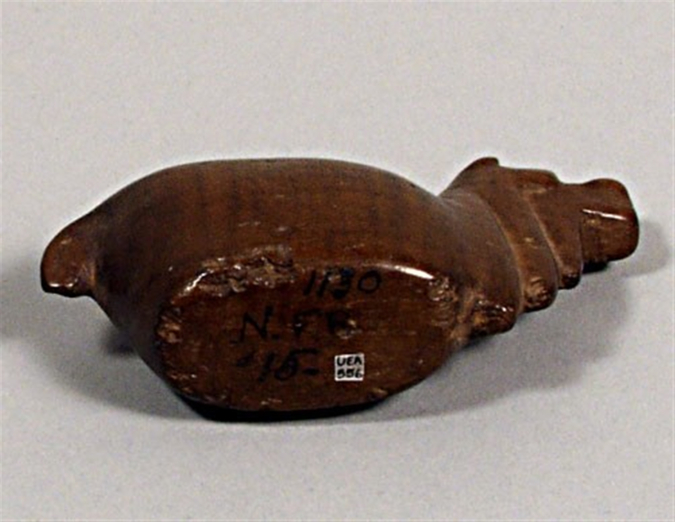 Effigies of llamas and alpacas are found throughout the Inca empire from Ecuador to Chile and Argentina. Made of stone or wood, they form a very homogeneous group, characterised by their small size, simplified treatment (legs, for example, are never represented), and by the presence of a cylindrical cavity in the back. A selection of these figures is illustrated by Jones (1964: nos. 23-5), including a wooden one, now in the Art Institute of Chicago, that is almost identical to the present specimen and is reported to come from the Huarmey valley on the central coast of Peru (see also Levenson, 1991: 597)- A few stone examples have been found with miniature pestles, and some material may have been crushed in the cavity before the figurine was deposited as an offering.

During the last century, little stone animals of this type were still being offered by the farmers of the Vilcanota valley (in the Peruvian Andes) to Pachamama, ‘Mother Earth’, worshipped by Inca cultivators and herdsmen. The cavity in the back of the animal was filled with alcohol or coca leaves, and the effigy buried in the pasture land in order to increase the llama herds and to ensure an annual growth of fresh green grass. The ritual was repeated in the same place every year. Thispractice is recorded as early as 1586 in Colonial documents referring to the Huamanga region, and the custom might explain the groups of prehispanic llama figurines found buried near the Inca capital at Cuzco (Verneau and Rivet, 1912:186-92). Pottery figures are used for the same purpose today, and provide a clear instance of continuity in Andean culture from Inca times to the present.

Formerly in the collections of Alphonse Kahn and Michael Stewart.

Purchased by the Sainsbury Centre, University of East Anglia from K. J. Hewett in 1974 out of funds provided by Robert and Lisa Sainsbury.