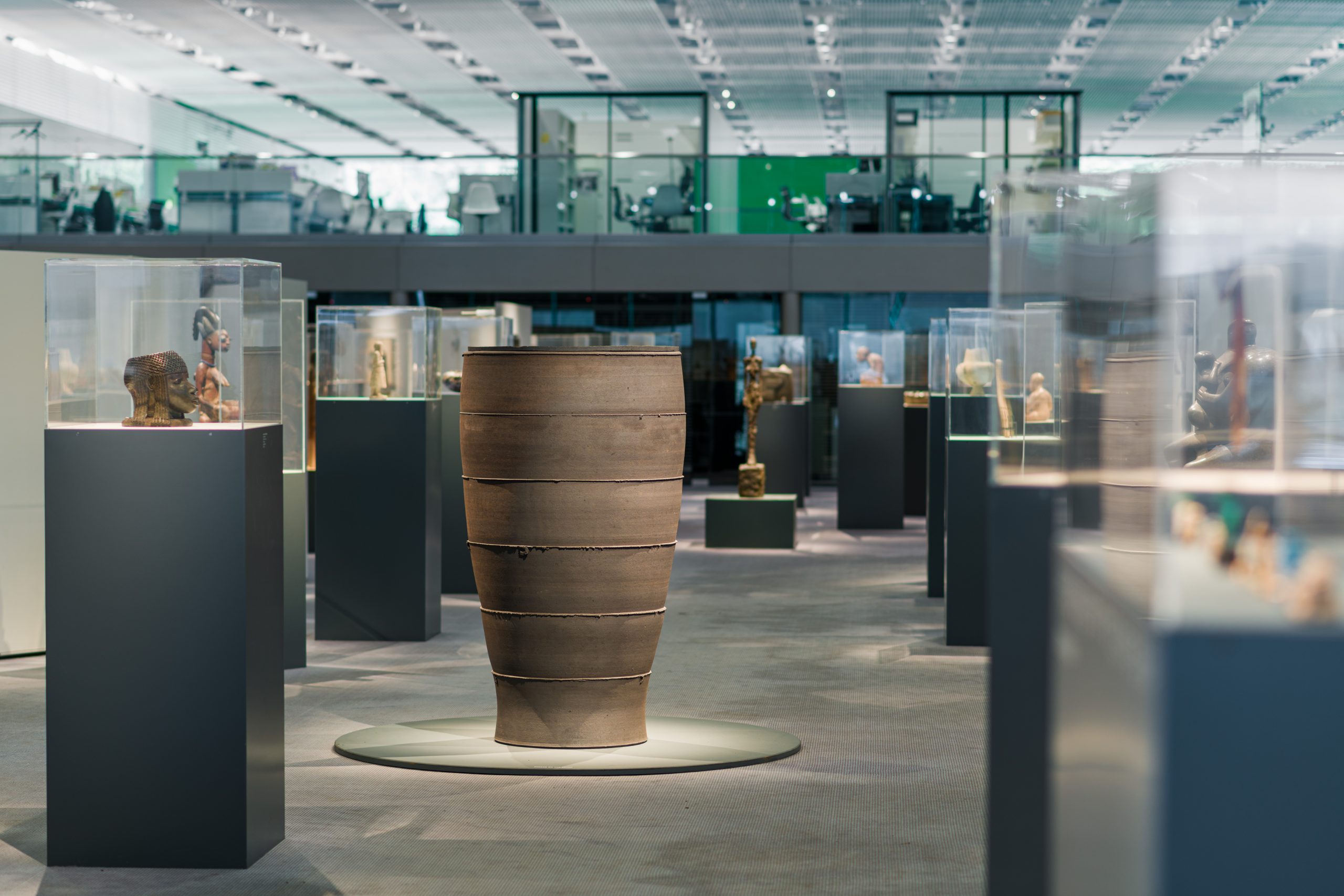 From meeting Lisa Sainsbury in 1982, to his latest monumental jars, the artist discusses his history with the Centre

There is something eerily familiar about Julian Stair’s Monumental Jar VIII, 2011, one of the newest arrivals to the Sainsbury Centre’s collection. Heavy, tall, and with a curving form that swells and fills the space around it, this earthenware jar is much more than an astonishing object – it is a reflection of ourselves. It’s “an abstracted figurative form”, says the artist. “It’s the human body, but simplified down.”

Created for Quietus: The vessel, death and the human body, a touring exhibition that explored themes such the body being a vessel for the soul and the ability of art to mediate death, Monumental Jar VIII marks a step forward in scale for the leading British artist. But in its focus on the human form and condition, it also represents a furthering of interests that have been circulating in his practice for decades – interests that are present in the bowls, teapots and smaller funerary wares also found in the Sainsbury Centre’s collection.

Each of Stair’s works at the Centre, for example, are tied closely to another key attribute of humanity: the senses. For Stair, centuries of handling, looking at and using ceramics means “they can communicate actions through our total familiarity”, he says. “We can look at a pre-Colombian pot, at a Roman pot, and we understand what these objects are for, because they were made to be receptive to the human hand and mouth; to transfer food or liquid to our bodies in social contexts.” In his own creations, undulating lines and rough, unglazed surfaces emphasise this tactility and historical function, and engage viewers in what he describes as a “multimodal experience” shared by almost all cultures throughout history.

This idea of pots as a portal into the past is one that Stair was introduced to in the work of artist, academic and author Philip Rawson. “Philip helped me, in a way, intellectualise or identify what I had intuitively reached out for,” he says. It is an idea he has developed throughout a career in which he has had encounters with some of the founders of British ceramics – Bernard Leach, Michael Cardew and Lucy Rie – and during 10 years spent sharing a studio with writer and fellow artist Edmund de Waal. “Edmund and I both wanted to question and query and contextualise work within a historical frame,” he explains.

At the Sainsbury Centre, it is an approach that fits neatly into a collection of objects similarly affiliated with age-old traditions and cultures. Monumental Jar VIII embodies a sense of timelessness in the same way as the Centre’s mysterious Cycladic figures, delicate Giacometti sculptures and stalking birds by Elisabeth Frink. These works follow the “Modernist characteristic of reducing things down to an essence”, and this is a sensibility that, the artist explains, carries through all of his own practice.

These connections were not lost on Robert and Lisa Sainsbury. Stair had only just left college when Lisa Sainsbury saw his work at a 1982 group exhibition in London, and “called up and said very nice things about it”, says Stair. Over the years that followed, the couple would acquire many of his works, and invite him to their London home in Smith Square, where the artist recalls discovering “a Bacon pope just inside the door, the Lucy Rie and Hans Coper pots in the living room on the mantelpiece… and a white stoneware Tang Dynasty pot – one of the best I’ve ever seen”. It was a “rounded relationship” defined by support and encouragement – Lisa, for example, once gave Stair and a fellow artist an interest-free loan to build a studio.

When the couple were older, they purchased a series of Stair’s cinerary jars – “drawn to the work because they’d responded to it as they responded to all art, with their eye and with their gut” – rounding off decades of acquisitions that have helped to make the Centre the most comprehensive repository for the artist’s works. Stair is delighted to be so well represented at an institution where “everything was bought with an extraordinary commitment, enthusiasm, love [and] an amazing eye”. It’s a collection, he says, with a “soul” – and now, should you wish to look for it, there is an obvious place to start.