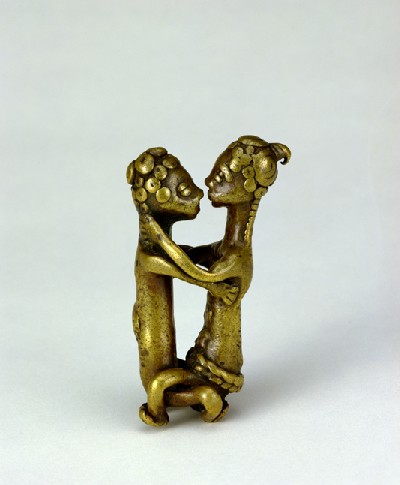 Small does not mean simple. From maps and paintings to amulets and tiny temples (not to mention books), people throughout the globe have attempted to condense worlds into manipulable objects. Sometimes these worlds were their own, sometimes they were meant to include those of others. Indeed, as anyone who looks closely at a detailed model will know, much can be encapsulated in unexpectedly minute dimensions. Conversely, models have the power to pull us in, rather as visions calling to be unpacked, as if their relative smallness somehow made them, at once, more intelligible and potent.

The miniaturist – in whom technique and interpretation, matter and idea, are themselves inextricably condensed – is therefore one to be respected. Their challenge, and their uncanny skill, is to work at that atomic level in which body and thing become mutually vulnerable: breathing becomes motion as heartbeats rhythm the re-enactment of a more fundamental creation. A cosmology not only condensed, then, but in the making. Yet it is not just an uncommon understanding and the possession of cosmogonic power that the capacity to achieve accurate smallness reveals (while concealing the artfulness and artistry behind it). Privacy and personalisation also play a part, and where potency can be concentrated, mystery is multiplied. Inspired by Professor John Mack’s book, we challenge you to think about the art of small things.

Goldweights from the Akan-speaking people of Ghana, especially the Asante, are found in many museum collections. Such small cast-brass weights were used to measure gold dust, which was the currency in that region until the colonial powers introduced their own. The weights were made in many designs, including household objects, tools, sacred animals and abstract geometric forms. Human figures in intimate positions, such as this, are rare.

This example shows a loving couple during coitus, embracing and about to kiss. The hair is shown in tight ringlets or coils. The female has long hair, large hair coils and a stylised bun and wears a belt of waist-beads. The male figure appears totally naked. The faces have been cast in great detail and carry tattoo markings. These characteristics suggest that the weight may have originated amongst the Baule portion of the Akan-speaking people. The figures show signs of wear, with areas highly polished with use, showing the warm glow of the brass.

Goldweights were personal items as the weighing of gold dust was part of even the most minor of transactions. They have sometimes been referred to as ‘proverb weights’, as many designs refer to Akan proverbs, with the weights acting as miniaturisations of myths and moral tales. The ‘embracing figures’ may relate such maxims as ‘a fresh vagina wakes the sleeping penis’ or ‘if you know how to have sex, you are no better than your father in law’. Whatever the meaning behind these images, the scarcity of this form of weight suggests that such a private act should not be seen in public and that these designs may have been a personal pleasure. 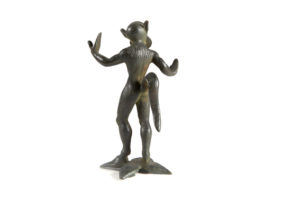 Satyrs or Silenus are male creatures or spirits closely associated in Classical Greece with Dyonisus, the god of wine and ekstasis. Early satyr characterisations emphasise their comically hideous character as lovers of wine, dance, music and women. They are always naked, having horse-like legs, tail and ears. Sometimes they have been represented with an erected phallus that denotes their virile and unrestrained nature, always in constant relation with their female counterparts, the nymphs or Maenads.

This dancing satyr belongs to a group of small bronze sculptures of the kind popular in Etruscan art during its classical period (480–320 BC). Satyrs were portrayed in different positions such as playing Pan-pipes, reclining and dancing as we can see in this example. Their vibrancy and exuberant pose has been associated with the Greek sculptor Praxiteles who created a new artistic type in which the Satyr was young and handsome, with minimal animal parts.

This figure stands on a large quatrefoil leaf and probably comes from the lid of a vase or candelabrum. His athletic body is in perfect balance with the base while his outstretched arms and upright palms accentuate the sensation of movement. It is not difficult to imagine the sound of the pan flutes that enliven its dionysian dance in the middle of an old Mediterranean forest. 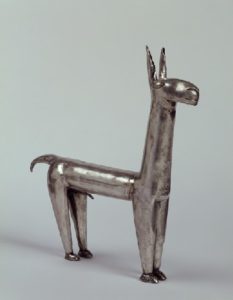 This Llama figurine is one of the most important iconic and memorable objects of the Sainsbury Centre. Throughout the Incas’ existence, they introduced standardised forms of architecture, pottery, cult objects and religious practices. At very important state functions, offerings and sacrifices were made at shrines, mountain tops and other sacred places, where they would bury clothing, fancy pottery vessels, food, animals, paired miniatures of llamas in either gold or silver and human beings. At occasions like the Capac Hucha ceremonies, when a new ruler came to the throne, and the Capac Raymi festival celebrating the December solstice, young children were sacrificed and buried alongside such llama figurines and small human effigies in precious metals at the most sacred places in order to show allegiance to Inca sovereignty.

The hollow miniature is made of a silver/copper alloy taken from various pieces of sheet metal, which were cut and then joined. The body is a rolled cylinder with a seam along the belly; the neck and legs have been made in a similar way, and the feet seem to have been attached separately. The head was formed separately, with additional pieces for the ears. There is no evidence of welding, implying that those could have been individual pieces forced together and then burnished. Its features are of a lean and youthful body, simple, yet remarkably elegant. 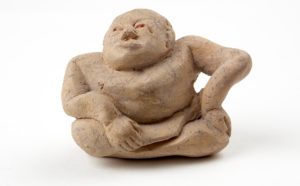 The ancient Mesoamerican world is full of hunchbacked and dwarf figures. They can be found in a wide range of media such as clay and jade, incised jades and shells, polychrome pottery and monumental sculpture. Dwarf persons were considered special due to their physical particularities. It was thought they had divinatory powers and they were sought after as relevant members and entertainers in royal courts.

This small, modelled Olmec-style figurine represents a seated hunchback man with a protruding abdomen and a shortened trunk. The head is unusually big and his sunken face seems to look up following a lively conversation while opening his crooked mouth. There is a sense of movement in his limbs and forearms noticeably curved and large. It is seated in a cross-legged position in which his legs seem to embrace his body. His large nose and almond eyes still have traces of red pigment. Possibly, the figure is the portrait of an old man dressed in a loincloth indicated by incised lines around the back.

Some specialists have suggested this figure may have been the personal possession of a ruler or an important person who wanted to keep the supernatural powers it indicated close at hand. Others think this type of dwarf figure was manufactured to substitute real dwarfs in the benefit of those who wished to have been buried with them, as happened with some Mayan rulers who were buried with their entire court in attendance after death.

Several amulets symbolised various deities in ancient Egypt and were used as votive gifts at temples and shrines. They were often strung on necklaces for personal adornment and protection hence the suspension loops on most of them. 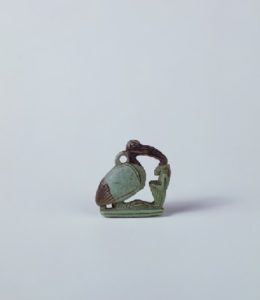 The Ibis and Baboon amulet jointly depicts the two sacred animals of Thoth, the divine scribe and god of writing and knowledge and the protecting god of ancient Egyptian kings and scribes. The bird, a bird once common but now rarely seen in Egypt, is here seen crouching on a thin rectangular base with its feet before it and its beak resting upon the head of the squatted baboon wearing a striated kilt, with its fore paws on its knees.

Underneath the base of the object is an inscription which read: ‘The lord of Hermopolis’. Meaning the ‘city of Hermes’ in Greek, this refers to a major cult centre of the god Thoth whom the Greeks associated with their god Hermes. The Egyptians knew this place as Khmunu (‘Eight’) referring to the Egyptian myth of eight ancestors who created the first child, and it was believed that the first sun rose over this city at the world’s creation. Some of the most important remains dedicated to Thoth have been found at Hermopolis. 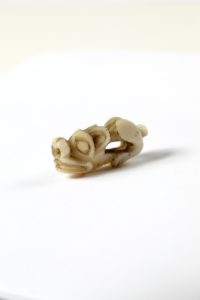 This héix̲waa/ha’dsanaash (Tlingit/Tsimshian) would have been made specifically for its wearer, an íxt’/halayt, shaman. Pending from a leather cord alongside other amulets, the strand would have resounded as the shaman moved, producing part of the music of their work.

Héix̲waa/ha’dsanaash were part of a set of shamanic tools which also included a dance apron, rattles, a bear claw crown and red ochre paint. Though shamans in some communities could appear unkempt and very differently adorned than others, among the Tlingit and Tsimshian they were highly regarded, acting as healers and intermediaries for spirit forces. They used their spiritual abilities to thwart malicious entities such as witches who caused warfare, sickness and adverse weather. Their specialised work, however, was dangerous – hence the need for such spiritual tools for protection and power. Christianisation, new diseases and changing ways of life, however, meant that few íxt’/halayt remained by the late 19th century and collectors took advantage of these circumstances to procure shaman paraphernalia.