FREE to view from 14 July

Anish Kapoor is one of the most important sculptors working today and internationally recognised for large-scale works such as Marsyas, the vast trumpet-like form that occupied the Turbine Hall at Tate Modern in 2002. His mirrored steel work, Cloud Gate, in Millenium Park Chicago is one of the most iconic pieces of public art created in recent times. His 2009 retrospective at the Royal Academy was the first exhibition ever held there to be dedicated to a single living artist.

Kapoor came to prominence in the 1980s as part of the New British Sculpture movement and he won the Turner Prize in 1991. This generation of sculptors found a renewed interest in traditional materials long associated with sculpture and techniques such as carving in stone. Kapoor became known for geometric sculptures in granite, limestone, marble, pigment and plaster.

The two works that Kapoor has chosen for the Sainsbury Centre draw on the special properties and symbolism of alabaster, a soft stone prized since antiquity for its translucency. Two giant blocks of alabaster with their interiors carved out, these works demonstrate Kapoor’s interest in the void and with ideas of the infinite.

The sculptures resonate with works in the Sainsbury Centre Collection, such as vessel forms from the ancient world of Egyptian and Cycladic or the modernist abstractions and biomorphic forms of Eduardo Chillida, Jean Arp and Henry Moore. They will be displayed in the central bay of the East End gallery.

This display is presented as part of a major exhibition on show across the grounds and historic interiors of Houghton Hall. This display would not be possible without the support of the Houghton Arts Foundation.

“The two works that Kapoor has chosen to show here draw on the special properties and symbolism of alabaster, a soft and translucent stone prized since antiquity not least due to the way its surface responds to light.” 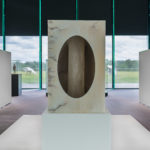 The Living Area is the display of the eclectic Robert and Lisa Sainsbury Collection. FREE daily guided tour Tuesday - Sunday at 2pm (From 8 June)

The artworks in our collection and exhibitions come to life when you join us to look, think, discuss, question, create, play and tell stories around them. Find out how you can get involved and become a part of our learning community.